1980: Hyde was one of the largest housing associations in the country, managing nearly 3,000 homes.

With the support of the London Borough of Greenwich, Hyde completed the largest ever Housing Corporation funded purchase. This was for 490 homes on the Progress Estate Eltham, from the Royal Co-operative Society.

The Southampton Area Office was opened to manage Hyde’s growing presence in the region.

The Temporary Lettings Section was formed to provide housing for homeless single people, using empty homes owned by Hyde and the local authority. As homelessness increased, demand for this service went up significantly.

1982: Hyde’s Staying Put Project was created, continuing Hyde's work with elderly people and in response to the disproportionately poor condition of housing for the elderly. This project helped older residents stay in and maintain their own homes, with improvement grants and interest free loans, rather than moving to sheltered accommodation, which many did not want.

1983: the Southwark Area Office opened, the first of the London Area Offices.

1984: Hyde Charitable Trust was setup to support residents in most need, as well as helping local community groups.

1987: with the support of the London Borough of Greenwich, Hyde organised a complicated partnership deal, with a property developer, to purchase the remaining Morden College Estate properties in East Greenwich. This effectively safeguarded existing residents and ensured the majority of the 295 properties stayed in social housing. 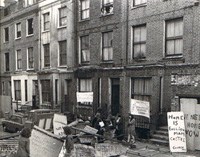 1988: The 1988 Housing Act established local authorities as enablers, but not developers of housing, leaving housing associations as the sole providers of new homes. The Act instigated a new approach to funding with homes only partially paid for by grants. The remaining cost would be borrowed against the association’s assets and paid back through rents.

Over the next 15 years, Hyde evolved from an effective charitable housing provider to a large complex social business.