1991: Wealden Housing Association based in Surrey and Sussex chose to merge with Hyde, establishing its regional area in the South.

Wealden Housing Association needed to work with an association that shared our ideals. We were concerned to provide a decent quality of life for our residents…Hyde seemed to share this philosophy. 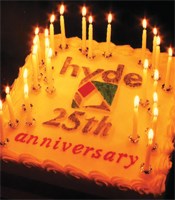 Hyde was one of the leading providers of special needs housing. Working with 62 agencies and managing 302 projects, the association already provided homes, for nearly 1,500 people with special needs.

Hyde finished the first phase (32 homes) of a scheme in Camberwell, known as “The Spike”, a notable feature of Southwark since the late 1980s, completely transforming a decaying architectural gem.

1996: Hyde Plus was created as the group’s dedicated economic and community regeneration arm to deliver a wide range of programmes and projects, addressing some of the most pressing economic and social problems faced by tenants.

Hyde was involved in ten-large regeneration schemes and was playing a leading role in the revitalisation of South-London. This was driven by closer working between local authorities and housing associations.

1997: a good example of this was The Peckham Partnership, in South East London, one of the largest projects of this type in the UK at the time. The £250 million scheme included plans for health, sport, education and training schemes. In July the first homes were completed.

For too long, the regeneration of some of the larger estates in our inner-cities was on the political back burner…Over recent years that seems to have changed and Hyde is fortunate to be involved.

Hyde first took responsibility for managing Dartford Borough Council’s Housing, in 1995, and then moved into Lambeth, in 1999, to manage 5,000 homes in two neighbourhoods.  At the time, Hyde’s move into Stockwell was seen as carrying significant risk; it was an area that none of the other associations canvassed were prepared to work in. This step required organisational courage and a determination to make a difference to services on the ground.

Due to the success of this work, Hyde Southbank Homes was set up to manage these properties and carry out the comprehensive repair and regeneration of Stockwell and later parts of Oval, investing £60 million in the area.