Hyde employs over 1,200 people across London, the South East and Peterborough. Our staff are at the heart of what we do, we remain committed to the promotion of equality and we value the diversity in our staff.

This report looks at our current gender pay gap and identifies the work we still need to do. The data provided is accurate as of April 2017.

The following calculations make up the information required by the new regulations.

The mean shows the difference in average hourly pay between men and women.

This is where all the salaries – both men’s and women’s – are sorted by size and divided into equal quarters. The pie charts below show how men and women are spread throughout the organisation by salary brackets, from highest to lowest. 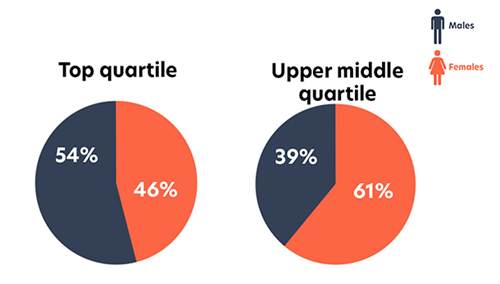 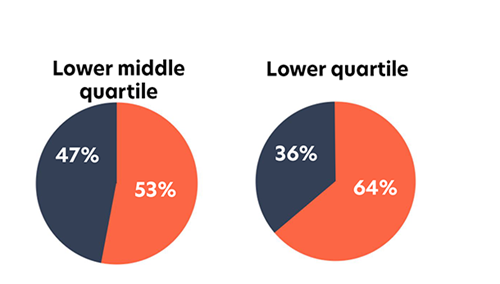 The proportion of employees who receive a bonus is

Even though it is lower than the UK average gender pay gap, we recognise that there is a gender pay gap at Hyde, with men being paid more than women.

Our salary ranges are built around paying the market median. Our analysis has shown that there are proportionally fewer females in higher paid senior roles. When we looked at the proportion of males and females in each quartile pay band, the figures showed that the quartile representing the lowest paid employees contained the largest proportion of females. In the upper quartile, the reverse is true, with males making up 54% of staff receiving the highest pay.

This means that Hyde’s gender pay gap does not stem from paying men and women differently for the same or equivalent work, but rather it is due to females being under-represented at the more senior levels at the time of reporting. This is something we are working on.

Since flexible working is important to us and 87% of our part-time workers are female, we have also calculated the gender bonus gap using the full-time equivalent bonus. Using this methodology, the mean gap reduces to 6.1% and the median gap to 0%.

The mean gender bonus gap is likely to be due to the fact there is a higher proportion of men in the higher grades who are in receipt of our senior staff bonus. The senior staff bonus is based on a percentage of salary rather than being paid as a flat rate, the latter being the case for our ‘all staff’ bonus.

Beyond gender, we are committed to ensuring we are a diverse and inclusive employer. We aim for our workforce to be reflective of the communities we work in and to maintain and benefit from the different perspectives our employees offer.